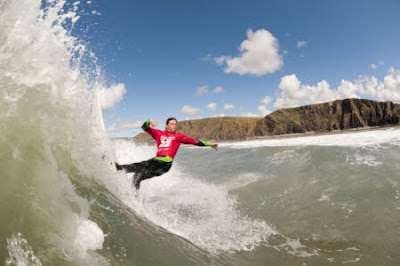 Now the weather is starting to look a lot better why not try something new and exciting outdoors? Our event "60 and never surfed?" planned for the 1st and the 8th August is an introduction to surfing for those who've never tried it but want to give it a go. It's never too late to learn to take to the waves with our Ambassador Business the Dan Joel Surf School at Poldhu.

If you think you'd like to give surfing a go or want to get back into the water get in touch here for details. Although the half day event is aimed at those over the age of 60, we aren't that strict! 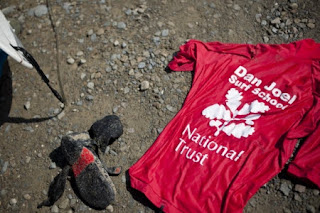 Layla
Posted by Lizard and Penrose NT at 12:01 4 comments:

Summer briefly appeared on The Lizard at the weekend for the annual National Trust Mullion Harbour Day. 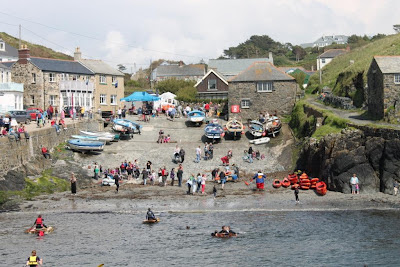 With a rare glimpse of sunshine at the weekend, hundreds of locals and visitors came down to Mullion Harbour for the annual Harbour Day. Working with our Ambassador Business, Lizard Adventure, they were treated to free taster kayak sessions, a raft race, harbour jumping, the "Sea Horse" Steeplechase (a run and swim whilst riding hobby horses made from discarded body boards) and the legendary "Greasy Pole" (pillow fights from a slippery pole jutting out over the harbour). Prizes for the games and races were kindly donated by local businesses. A hog roast and bar were provided to keep everyone fed and watered and stall holders set up shop around the harbour walls. The new RNLI Lizard lifeboat was on site and children's games and activities were provided in the marquee by our team of volunteers.

Mullion's annual Harbour Day is organised by the Trust primarily as a community event, but it also raises much needed funds for the ongoing maintenance of the harbour itself. This year's event with the involvement of Lizard Adventure, meant we were able to offer much more of an 'outdoors experience' with kayaking and raft races. And with all the recent negative publicity regarding the dangers of 'tomb-stoning' and messing about in the sea, they also allowed the local kids the freedom to have a some serious fun in the safety of the harbour. As one young lad said, just before a particularly acrobatic fall from the greasy pole, "I've not had so much fun in years! They should have some of these activities at the Olympics."


A big thankyou to Elle and the rest of the Lizard ranger team, and the Lizard Adventure team for organising such a fantastic event.


Justin
Posted by Lizard and Penrose NT at 09:45 No comments:

We teamed up recently with our friends at Natural England, RSPB and the Cornwall Bird Watching and Preservation Society to host two days of fantastic fun for all the family at the Lizard Wildlife Weekend. Based on the Green at the heart of the Lizard village the event was a huge success with both local and visiting families.

On offer were a range of guided walks introducing the local wildlife, the highlights of which were seeing a young family of choughs near Kynance Cove, watching the peregrine falcon scour the cliffs, and finding some of the Lizard’s rarest plants such as fringed rupturewort and long-headed clover.

There were other activities ongoing throughout the day such as green woodworking demonstrations, pond dipping, children’s nature crafts, owl pellet dissection and Cornwall’s very own premiere of  ‘Birchett-Swan’s Barn Owl Box Cinema’ , allowing visitors to peer inside the secret world of an owl nest box and watch recorded highlights.  Children and adults alike were mesmerised by the footage of owl chicks, recorded locally in nest boxes by naturalist Matt Birchett.


Along with the hustle and bustle of all the events, the atmosphere on the Green was vibrant thanks to live music from local musicians Emily Howard, Jonathon Coudrille, John Holden and Harry Rowland. The festival atmosphere drew in a wide range of visitors and kept people entertained all through Saturday. Unfortunately like many events this summer, bad weather curtailed activities so soggy conditions meant only a limited programme of events could be run on the Sunday.Well done to those intrepid families who braved the rain to go pond dipping with us!

For more information on all that happened at the Lizard Wildlife Weekend visit: www.cornishchoughs.org

Thanks to all who helped with this event.    Rachel and Rosie

Posted by Lizard and Penrose NT at 11:41 No comments:

Digging not so deep for history

Visitors to Poltesco over the last few days will have been treated to a glimpse of the past, as archaeologists have been at work peeling back layers of history within the old capstan at Carleon Cove.


The work, undertaken by Southwest Archaeology, was commissioned to gain a better understanding of the buildings within the cove, particularly the substantial round stone tower which housed a capstan, or fishing winch, used to haul boats up the beach below. The capstan, dating to the 1700s, is the oldest building in the cove, and was once beside a square of pilchard cellars (like those still standing at nearby Cadgwith and Church Cove). The fishing cellars made way for the serpentine stone factory in the late 1800s which is now itself largely in ruins. The archaeologists were set the task of finding the bearing for the capstan as historians have speculated for many years as to whether it would still be there, and if so how deep it would be buried .

The answer was surprisingly simple. Yes there is a bearing stone in the centre of the building, and it was just a few inches down! The socket  to take a wooden upright is clearly visible, with a round wear mark formed from the turning of the winch. The capstan was probably turned by manpower, although it's conceivable that ponies or donkeys were used. The long since infilled gap in the wall which the ropes would have passed through to reach the beach is clearly visible on the seaward side.  As well as the bearing stone, some other interesting finds unearthed during the dig included metal brackets, old clay pipe stems, a shoe insole, and a brass button stud. 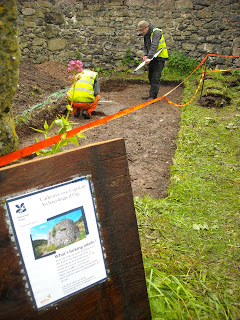 Whilst on site, the archaeologists have also been recording the exterior of the capstan, information which will help shape plans to undertake consolidation and repair work to the structure later in the year. We're grateful to the RDPE project which is funding both the archaeology and consolidation works. If you'd like to find out more about the fascinating history of Poltesco, join me for a guided walk on  Tuesday 17th July, meeting 1pm Poltesco carpark.


Rachel
Posted by Lizard and Penrose NT at 21:52 No comments: 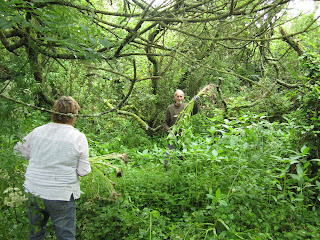 This week at Penrose we have been tackiling the problems of invasive plants. Our focus this time was Himalayan balsam. It is a relative of the busy Lizzie, but reaches well over head height, and is a major weed problem, especially on riverbanks and waste land, but can also invade gardens. It grows rapidly and spreads quickly, smothering other vegetation as it goes.

So whats the Problem? Each plant can produce up to 800 seeds. These are dispersed widely as the ripe seedpods shoot their seeds up to 7m (22ft) away. Once established in the catchment of a river the seeds, which can remain viable for two years, are transported further afield by water. 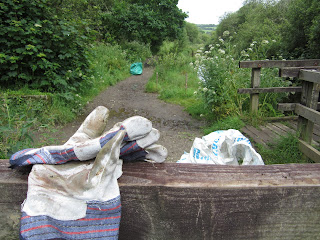 How do we control it? Plants that out-compete other more desirable plants or simply invade half the garden are classed as weeds and require control. First, we consider whether this can be done using non-chemical means such as pulling or digging out, or suppressing with mulch. If this can't be achieved, we would consider using chemical methods. But as they are easy to pull from the ground due to shallow roots we decided to manually remove them from the site. And as you can see below even Noodles the dog leant us a paw. 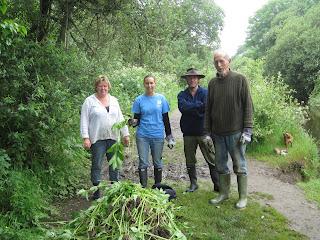 If you are interested in Volunteering on the Lizard or at Penrose please email me at gregory.cross@nationaltrust.org.uk


Posted by Lizard and Penrose NT at 13:12 No comments: