Bee Part of It!

Bee-ing part of it at Kynance.
The National Trust and BBC Local Radio are encouraging people to ‘Bee Part of It!’ this summer through a campaign to help the honey bee. In the UK alone, the number of honey bee colonies halved between 1985-2005 due to changes in land use, the varroa mite (which sucks the bee’s blood and spreads disease), and cold wet summers. To help tackle the problem the Trust has introduced 45 new honey bee colonies at locations all around the country. Each hive has been adopted by a BBC Local Radio station.
Here in Cornwall, the hive is located at one of the most beautiful locations, famous for it's rare flowers, Kynance Cove. Not only is this the most southerly (and westerly) hive in the 'Bee Part of It!' project, but one of the few which are located outside of NT gardens or 'gated' properties.
The hive has now been in place at Kynance for just over a month, moved from Predannack where I keep a few other hives. This colony of bees was collected as a very late, and very small, swarm last August from the cliffs at Poldhu. There is an old saying which states that;
A Swarm in May is worth a bale of hay,
A swarm in June is worth a silver spoon,
Whilst a swarm in July isn't worth a fly!
Based on this little ditty, heaven knows what a swarm in August is worth (nothing but dust?), but this colony seems now to be doing extremely well. They were kept alive over winter before numbers slowly started to increase earlier in the spring. The bees have now filled almost 2/3 of their brood chamber and are beginning to build up reserves of honey.
You can follow the bees' progress through the summer on this blog, or regular updates will be on Radio Cornwall and BBC Spotlight. Alternatively, the Bee Part of It! project has it's own national blogsite http://nationaltrustbees.wordpress.com/ or further information about bees can be found on the NT website www.nationaltrust.org.uk/beepartofit/ 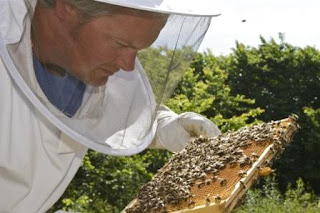 Posted by Lizard and Penrose NT at 14:02 No comments:

Trust working with the local schools.

300 Yr 9 pupils (13-14 yrs) are being introduced to the problems of water pollution in Loe Pool. In groups they are exploring the effects “of upstream on downstream”: the problems of run off from agriculture in the past, how measures are now taken to mitigate it - and the potential consequences of their own actions.

Organised by David Chambers National Trust and Lesley Content Helston Collage.
The Wardens of the Penrose Estate and a freelance environmental educator are leading the days.

The students are working within a cross curricular project shared between the geography and science departments of Helston Community College. This follows the success of a cross curricular Yr 8 project at Penrose exploring woodland management.

Each group walks to the Estate and follows a days activities which combines the collection of scientific data (water samples and a simple transect) with a lively way of presenting the problems faced by Loe Pool, including an encounter with an unenlightened “farmer” from the past extolling the virtues of 10:10:10 (and unwittingly exposing the problems of nitrate and phosphate run off); an exploration of some of the physical aspects of the pool, including willow carr areas; a look at how dragonflies are indicator species of water quality and an identity parade of some prime invasive species suspects.

The premise of the day is to consider “environmental criminals”, from “wicked weeds” to ourselves. In particular, the day explores the natural qualities and species of the pool, and highlights the unique and fragile nature of the natural environment within easy reach of the school.

Each group consists of thirty pupils and accompanying teachers. The day acts as the students’ introduction to their GCSE science course and last year was praised by the science department for changing the year group’s perceptions of the subject.
Posted by Lizard and Penrose NT at 12:37 No comments: 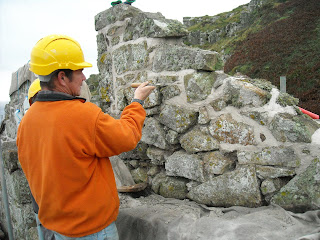 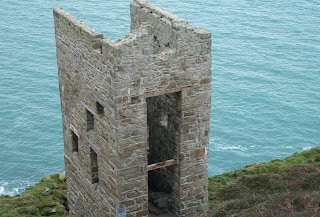 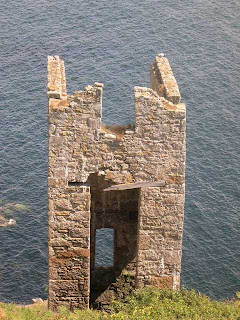 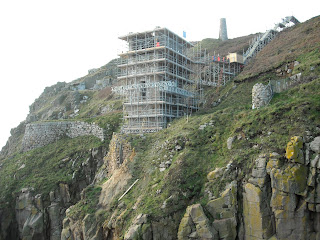 They say a week is a long time in politics but what about conservation ? Perhaps it's just about getting older but the time certainly seems to fly by quicker than it used to. It was only a year ago that we were out on the cliffs at Trewavas Mine celebrating the succesful consolidation work on these amazing Mine buildings, and it doesnt feel like 5 minutes since the Trust had just acquired them and we were fretting about what a challenge the work would be.

...and then an email arrives last week saying we had just won a Commendation Award from the Cornish Buildings Group for the project work completed.

Well, I hope the photo's give a flavour of what we were up against. Thirty-nine tonnes of scaffolding, forty tonnes of sand and eight tonnes of lime required for starters ! One replacement lintel alone required three half tonne timbers of green oak to be brought onto site and slotted into place like a giant version of Jenga.

Three things stand out for me. Firstly, without the Trusts’s Neptune Coastline Campaign (which funded the £550,000 of the conservation work) we might still be worrying and searching for a way to protect this wonderful place.

Secondly, how everyone on the project team and wider community pulled together to make it all happen despite the enormous challenges. Thanks again to everyone.

And finally, the wonder and respect these buildings instil in me for the knowledge, skills and spirit of the Cornish engineers who built and operated these mines. If you ever need your imagination fired and your spirits lifted take a stroll out to Trewavas on the coast path – you won’t be disappointed.
Posted by Lizard and Penrose NT at 16:10 No comments: 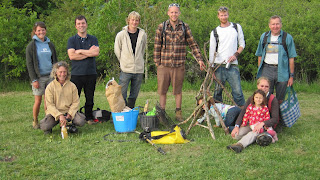 One of our Full Time Volunteers (FTV's) has just had a great bit of news - she has just made the jump into paid employment !

Lesley Key has been volunteering for the Trust here for 18 months, supporting all aspects of our work day to day but crucially at the same time developing new skills and experience to help her in her aim to get a full time job in conservation. Armed with tractor driving, chainsaw, fencing and brushcutter certificates, not to mention a wealth of practical experience of working with school groups, events and guided walks, Lesley is off to work with Hampshire Council as a Countryside Ranger.

The new job is a well earned reward for her commitment and enthusiasm ( for a career change from teaching) and as when all our volunteers move onwards and upwards, sadness to see people leave who have made such a difference is matched with pleasure in seeing how volunteering can be such a positive force in helping the Trust's work and giving new skills and opportunities in conservation.

A farewell barbeque at Point Field, Tremayne Woods (pictured) gave everyone the chance to say their own thank you's and farewells, and we look forward to the Postcards arriving with news of how the new job is progressing - Dont forget us !

For more information on volunteering with the National Trust go to http://www.nationaltrust.org.uk/main/w-trust/w-volunteering.htm
Posted by Lizard and Penrose NT at 14:39 No comments: 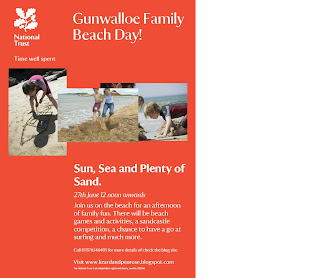 On the 27th June we will be having a family beach day at Gunwalloe Church Cove. There will be an opportunity to try some beach games and take part in a sandcastle competition. West Cornwall Adventure will also be on the beach giving surfing lessons. The day's activities start at midday, bring down a picnic and your bucket and spade!
Posted by Lizard and Penrose NT at 12:20 No comments: