Pigs don't fly, but tents do!


We were out in force at the Little Big Gig last weekend, a small independent music festival in Lizard Village, running fun nature inspired activities to appeal to folk of all ages.

However, the gales and lashing rain got the better of us Sunday, and we had to admit defeat when we awoke to discover our events shelter had vanished, only to be found shortly afterwards in the pig pen over the hedge! Luckily the pig could be distracted with a baguette, whilst we nipped in to retrieve all our gear, although he had taken a few bites out of the bunting! Oh well, we can laugh about it now!

Luckily, the weather had been much kinder during Saturday, and we had a busy day in the Wild Crafts area, run jointly by the Lizard NT Ranger team and Claire Scott, Community Outreach Officer at Natural England.


Word soon spread that we were the place to come to make yourself a lovely flowery head-dress, so much so that we had to keep sending out for more flowers from generous local gardeners! Also popular with kids were shell and bamboo shakers, all made from locally grown or collected materials.

For adults, there was the chance to learn some new rural skills, whether that be making a gypsy flower with a draw knife and a shave horse, turning a baby's rattle out of greenwood on the pole lathe, or mastering the technique for twisting natural cordage from leaf fibres. The race was on to see who could make the most feet of 'leaf string' in a day!

Apart from the pig wrestling and the gales scuppering plans on Sunday, we all had a great time and hope to be back next year!

Posted by Lizard and Penrose NT at 11:44 No comments:

For those of you wondering where the ponies up on Enys Head have gone, don’t worry. They’ve just moved next door to Kildown Point.
We had a great time moving them on Tuesday, getting very wet in the process as the weather fancied doing a bit of everything. In between glorious sunshine, the squalls would disappear out to sea as quickly as they came, giving us no time to put waterproofs on and leaving us sodden.
The ponies were great fun and as good as gold to move, they followed Beth, a fellow full time volunteer (FTV), without hesitation (probably because she had a big bucket of pony nuts). As soon as they saw greener pastures however, they were off with a snort and a whinny, charging as fast as their stubby legs could carry them, even old saggy belly managed a fast trot from the back of the herd.
It great to see the ponies in their new area, they’re looking really well and are loving the new grazing. A perfect partnership between man and beast! (especially if you have pony nuts). It’s all part of the big project to return the cliff tops to their former botanical state, allowing the many rarities to flourish again and, of course, to provide ideal habitat for our choughs.

We’ll keep you posted on the goings on of our Lovable Trustables, so keep an eye out and keep enjoying the outdoors!

Posted by Lizard and Penrose NT at 22:18 No comments:


This year's festival has been cancelled due to a lack of apples in all our orchards.

Yields have been low across Cornwall and in fact Britain in general so with regret the decision was taken to cancel until next year when it will hopefully be more fruitful.

Keep an eye on the blog for next year's event.

Nick
Posted by Lizard and Penrose NT at 13:10 No comments:

The volunteer holiday-makers have helped farmer Paul Parfitt and rangers Laura, Nick and Greg run the 300 acre mixed farm at Chyvarloe, near Helston in Cornwall.

This working holiday is, we think, unique in the Trust calendar and involves participants in a wide-range of farming tasks including old favourites like mucking out the pigs. They have also brought in the cows for TB testing, fed all the stock morning and evening, carried out ploughing, fixed the fences, restored some Cornish hedging and successfully herded the flock of Soay sheep, ready to be wormed and separated for market.

﻿﻿﻿
﻿﻿﻿ The week began with a Farm open day attended by 360 locals and tourists. The volunteers willingly pitched in and organised the car parking, refreshments and entrance gate and also held the turkeys for Christmas selection by the public.

Fine food and lots of it (plus the occasional bottle of Pinot Grigiot) also played a big part in proceedings, as well as trips to the Minnack theatre, Cadgwith for folk singing and competitive games of jenga and cluedo.

The farm holiday is definitely on the calendar for next year, and like all working holidays, it's the participants themselves that made it the success it was. So, a big thank you and well done to all of them!

Posted by Lizard and Penrose NT at 12:59 No comments: 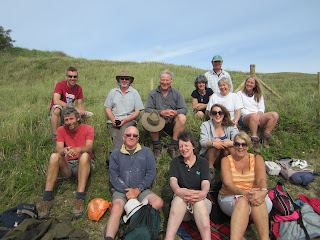 For most people the words "Work" and "Holiday" very rarely share the same sentence, but for a select few the idea of combining both is an opportunity not to be missed. On the 25th of August a group of 12 strangers awoke to begin their journey to the South West of England for an unknown week of work. One of the great things about National Trust working holidays is the variety, the variety of people you meet, places you see and things you do. The week starts by meeting at the place you call home for the week, Chyvarloe bunkhouse, located minutes from Loe Bar it’s a perfect place to relax after a days work.
Weather is always going to be a factor on any holiday, especially if you are working outdoors for 8 hours, on our first day the sun shone and where better to be than on the beach, well several beaches to be precise. The beaches of Cornwall are some of the best beaches in Britain, but like anything they also need maintaining. Our group took up the challenge of a 5 beach clean in one day. I was feeling ambitious and purchased 50 bags for our day, but after only 2 beaches we had to make a dash back to base for more. Its incredible what you find washed up on the beach, whether its cigarette lighters still washing up 10 years after a ship spilt its cargo, or French Champagne bottles that have crossed the channel you always turn up a surprise. The grand total for the day was 79 bags filled, when you see a skip almost full with things gathered off the beach it puts into perspective the need to try and keep Cornwall’s special places "special". 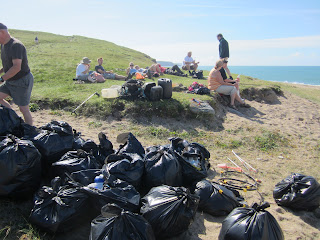 On day 2 of the holiday the weather had decided enough was enough and for 8 hours the heavens opened, but we few, we happy few continued on. The tasks of the day were two fold, tackle the jungle of Bamboo that had been left untouched for years and to "time team" uncover the building structures in the walled garden. Bamboo isn’t one of my favourite things after needing stitches after my last encounter but with a hardy group of volunteers armed with loppers and bow saws it was time for revenge, however it did not go quietly into the night as it sounded like a WWII film when burned. In the walled garden there were no Roman villas found but we uncovered the old potting sheds and can now begin to plan ahead. 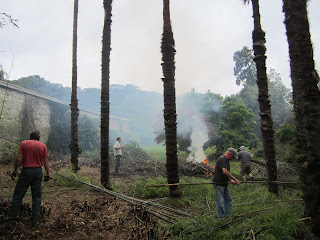 After a well earned day off the group donned their spurs and chaps to help heard a local farmers cows out of the fields back into the farm yard, W.C Fields famously said never work with animals or children, well i can vouch for the animals aspect. The ladies did not want to go back into the field, and with their leader "Iron Mike" the bull they managed to run into an adjacent field. After I had played the rawhide theme and we are all feeling motivated we managed to get them back into the farm. Next stop on the day was a trip to Carmino Creek to lay chicken wire on the boardwalk. The sun was out again and after a fairly relaxed day we headed to the Minac Theatre to watch David Copperfeild, I am sure the first half of the show was amazing but I must admit to missing it as I spent my time watching two basking sharks feeding in the shallow water below the theatre.

Our last two days were spent fencing, I don’t mean parry and riposte fencing either. The order of the day was sheep netting with two strands of high tensile wire above. We were blessed again with the weather and I was blessed to have a group that were so skilled in fencing, the result was fantastic. To celebrate the days work a quick dip in the sea was in order, and after two days we had completed our work. 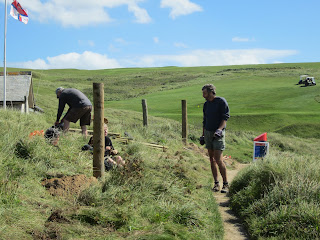 It was a fantastic week; we managed to get a massive amount of work done and still have a great time. I couldn’t have asked for a more willing, friendlier, harder working group of people to spend the week with. I hope to see every one of them again next year.