60 students joined us recently to remove scrub from the cliffs at Predannack,Chynalls Point and Poltesco as part of a residential visit. The students got involved as part of their International Baccalaureate Qualification, adding to the community hours required in their studies. It was also a great opportunity for them to get to know each other and to work as a team in a different setting to the classroom.The Two days proved to be a great success for the students and The National Trust with some extensive scrub removal achieved , the results of this hard work will benefit  wildlife, better Public access and Archeology and at the same time gave the students a better understanding of the Trust's work.
During the days at Chynalls Point an old stone field boundary was uncovered which had been completely covered for many years and may be with further investigation part of the old Bronze Age Fort  The next step here is to get it surveyed. Many thanks to all who were involved.
Nigel
North Lizard Warden
Posted by Lizard and Penrose NT at 11:52 No comments:

Half term events coming up

Check out our list of half term events next week, you can join the Trust or one of our working partnerships for something exciting to do nearly every day!


Bush Craft Day - Tuesday 26th October at Bochym.
In conjuction with Natural England, more details to follow or call 01326 240 282 for information.
Adventure Day For Girls - Wednesday and Thursday 27th/28th October at Tremayne woods.
In partnership with the Eden Project, we will be building shelters, making rafts and cokking on the campfire in the woods. Camp overnight if you dare! For info and bookings call  01726 818888 or email lwelshman@edenproject.com
Hallowe'en Latern Workshop - Friday 29th Oct Poltesco.
Make scary laterns from willow and tissue paper in Poltesco education room. 1-4pm. For info tel. 01326 240282
Child £2.50
Mega Scrub Bash - Saturday 30th October Predannack
On Make a Difference Day (MADD), lets go mad and clear some of the scrub from the cliffs for the local wildlife. Spuds and sausages on the fire afterwards. For info call 01326 240282
Penrose Woodland Walk -  Sunday 31st October Penrose
Gentle walk to find out more about our winter work, including tree inspections and using wood chips as heating fuel. For a place on the walk please call: 07879430703
Posted by Lizard and Penrose NT at 13:27 No comments:

Over 10 days in fair weather and foul,year 8 students from Helston Community College have been coming to Penrose to discover how the woodlands are managed.

Actually, the day starts 1000 years ago, with an insight into the way the Anglo Saxons used trees in their everyday life.  Along their journey from that time to this, under the falling Autumn leaves they have discovered the different attitudies of the Saxons to the "salwe",the"dark" tree they mistrusted and of the Cornish to the "heligan", the "singing tree". They are both names for the Willow of course.

But then everything about the has been to do with looking afresh at the familier. A dead pine tree? Wait till you hear the storey of David Douglas who discovered it, or come up against a native Amercan "Anayupt?", or how he met Ned Gurney, that bull catahing ex convict.  Woodchip? Well you need to know how to fell the tree first, and what better then a demonstration by myself and Steve, the Penrose Wardens who still use the language of 1000 years ago.

Nearly 300 students have come over the past 10 days as a joint English/Drama venture. They will use it to create their own work, and prehaps have learnt how the National Trust is reducing its carbon footprint at Penrose, by joining the techiques of the past with mondern technology

So if you want to know anything about woodland, year 8 at Helston College are the experts.

We would like to thank Pippa Reynard From Helston College for her help in organising the days and Mark Haradon [captain of the West] for his fantastic storey telling skills.

David
Posted by Lizard and Penrose NT at 09:48 No comments:

This half term the National Trust are running a series of exciting activities for kids of all ages.
There really is no reason to be bored!!
Justin 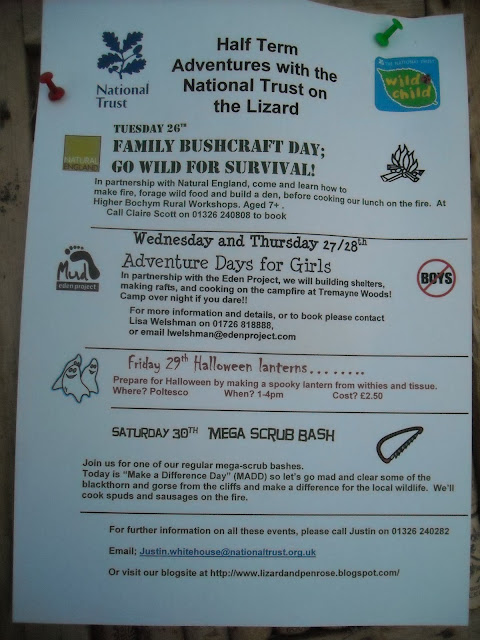 Posted by Lizard and Penrose NT at 18:39 No comments:

Today I was joined by about 30 foragers on our first NT fungal foray around Tremayne Woods.  Weeks of very dry weather however meant I wasn't too hopeful of finding many interesting mushrooms, as fungi tend to favour damp muggy autumns.  Over the past few days I had scouted around some of my best foraging haunts so at least I'd have some specimens to show, but even some of my most guaranteed spots were free of any fungi.   Never mind, we were blessed with glorious weather for the walk so whilst we may not find any mushrooms, at least we'd all have a pleasant walk in the woods.

After meeting at Gear Farm and ordering our pasties, we walked down into the woods.  Whilst fungi were certainly thin on the ground, it wasn't long before our trugs and baskets began to be filled with a vast array of specimens.  Some of the younger members of the group scrambled up and down the banks to get the more inaccessible ones, whilst others spread out either side of the track searching the woodland floor and on the trunks of trees. 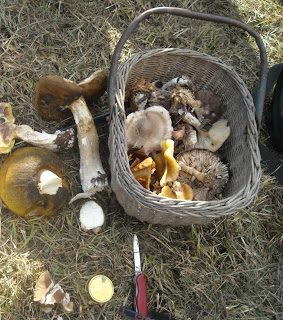 Most of the fungi gathered were of little culinary interest, including honey fungus, earth balls, sulphur tuft and various small non-descript specimens.  However, a few edible species were found, including shaggy parasols, amethyst deceivers, a wonderful beefsteak fungus and a single small cep. 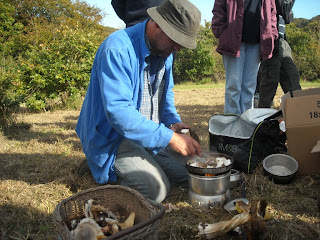 By lunchtime we had reached a clearing at Point Field where we investigated our hoard and waited for delivery of the pasties.  Still not really enough edible varieties to feed the whole group however.  I then remembered a secret spot nearby which had never previously let me down.  A quick scramble down the bank, under a large beech tree were half a dozen very large ceps.

We cooked a small variety of the mushrooms on a camping stove. Most of the group were brave enough to give them a try, others perhaps didn't have quite enough confidence in my identification skills!     The pasties went down well anyway. 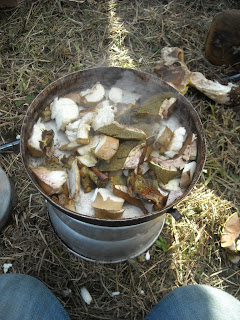 Posted by Lizard and Penrose NT at 18:15 No comments:

﻿"Please Sir, can I have some more?" Mullion Soup Kitchen


Apparently, many children in Britain today are completely unaware as to where their food comes from. Milk comes from a bottle on a supermarket shelf, meat from vacuum packed plastic packets and soup comes from a tin.
As part of the Mullion CP School’s Wildchild gardening Club, I have been very keen on re-establishing the link between what we grow and the food we eat. “From Plot to plate” as they say.
Last Friday, we finally got around to turning some of our autumnal harvest into soup. Real soup.

A large pumpkin, onions, leeks, potatoes and a couple of very large courgettes, all grown by the young Mullion gardeners, were chopped up by the children and turned into the most delicious wholesome soup. The only addition was some cumin, which the children dry-roasted and crushed in a pestle and mortar.
﻿﻿ ﻿﻿﻿ ﻿
There was so much soup that I really though we would have enough to bring into school and share with their classmates on Monday morning. However, I didn’t count on the fact that these kids really loved their soup, (to the extent that one young gardener had 5 bowls of it!!! ) and a few teachers obviously caught a scent of the lovely aromas coming from the kitchen and wandered in to share it with us. The whole pan was wiped clean, not a morsel was left!
Next week we'll be clearing out the wildlife pond and preparing the vegetable beds for winter.  Happy gardening
Justin
Posted by Lizard and Penrose NT at 21:42 No comments:

Class 1 from Landewednack School enjoyed a sunny and fun packed day out on St Michael’s Mount yesterday, courtesy of The National Trust’s Guardianship Scheme. The class learned about islands, and were treated to tales by professional storyteller Mark Harandon, Captain of the West. He enthralled the children with the Cornish legend of St Michael’s Mount’s own terrorising giant Cormoran who carried cattle away dangling from his belt, and who was eventually killed by plucky local lad Jack the Giant Killer, who went on to greater beanstalk fame. The giant’s heart turned to stone, which can still be found set into the path to the castle, so it must be true!
Class 1 loved manning the cannons, and explored the Castle with guide Catriona, who explained all about the armour, portcullis, and Giant’s spoons, not to mention the mummified cat!
For those children who have just begun school in the last few weeks, even the bus journey was a brand new exciting experience it itself.
The visit was organised as part of an ongoing Guardianship Scheme, which has fostered close links between Landewednack School and the National Trust staff locally for fifteen years. The partnership is focussed on our nature garden at the Waterings, within walking distance of the school, but each year we also try to visit Poltesco to go rockpooling and explore National Trust properties further afield, with visits to Godolphin and Lanhydrock, as well as St Michael's Mount.

Rachel
Posted by Lizard and Penrose NT at 13:59 No comments:

John and David, batmen of Grochall

﻿﻿﻿﻿﻿ ﻿﻿﻿﻿﻿
Volunteers David and Kathryn Issitt and John and Brenda Lancaster have been hard at work on our newest nature reserve at Grochall, just a stones throw from where they live at Mile End, Lizard. We bought 44 acres of farmland here last December, thanks to the generosity of Elisabeth Lee, who left a legacy for the purchase of a nature reserve in Cornwall. The land here fitted the bill perfectly, being rich in wildlife, such as nesting barn owls, ponds and heathland, and being nestled between two nature reserves, Natural England's Lizard Downs to the South, and Windmill Farm (jointly owned by Cornwall Wildlife Trust and Cornwall Bird Watching Preservation Society) to the North, opening up all sorts of opportunities for linking access and wildlife friendly management.
David and Kathryn, and John and Brenda, ever enthusiastic, have helped with all sorts of tasks from planting apple trees, to daily checks of our ponies and cows, but their latest project is bat based! Our bat expert advised, that although, with thick hedges and wildlife friendly margins meaning lots of good feeding habitat for bats, without old buildings and trees, roost sites are limited at Grochall. That's where David and John, drill and screwdriver in hand, stepped in to leave our bats (probably mainly pipistrelles) spoiled for choice when it comes to designer homes. Meet the Kent Bat Group Bat Box! David and John have made 7 of these boxes, complete with narrow voids which bats can crawl into, to feel secure as they rest in the day, which are now fixed to a new barn. A borrowed bat detector has shown that our nocturnal friends have been out and about, and we hope its only a matter of time before they move in. Thanks to David, John, Kathryn and Brenda for all their hard work at Grochall.
Rachel
Posted by Lizard and Penrose NT at 23:46 No comments: