The dedicated Friends of Poldhu and Poldhu BeachCafe braved the rain and wind last Friday to make some vast improvements to the 'flower triangle' at Poldhu.

The triangle of land that sits between 2 roads on the north side of the beach has always been used by locals as an easy parking spot for surfing or walking. Last year the council decided to fence off the triangle for safety reasons. The earth mound that was left was quite an eyesore as you drop down the road to Poldhu Cove so Mullion in Bloom took a proactive approach and planted it up with a wildflower seed mix. The results were stunning and caused more of a safety problem than there had been previously as people stopped in the road to photograph the sea of poppies and cornflowers with Poldhu cove as a back drop.

Unfortunatley the posts have since been hit by various vehicles and has been left looking rather disheveled and wonky. So the Friends of Poldhu decided to do something about it and create a fence that would not only be more robust but much more aestheticaly pleasing and inkeeping with the surrounding landscape. 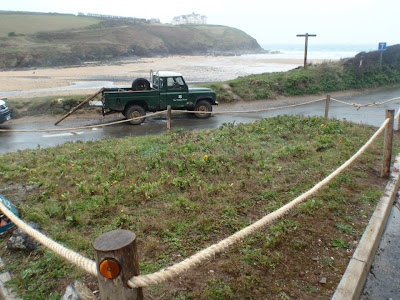 Despite the weather and vast amounts of contrete we had to chip through to get the posts in far enough, the dedicated team got the job done and all in good spirits. We used natural sisel rope and chestnut posts which have a natural preservative in them making them last a long time. As it weathers, the fence will take on a 'beachy' look and (providing the buses don't swing to wide) will last a very long time.

We look forward to seeing the triangle in bloom again this year and many thanks to the Friends of Poldhu for all thier hard work. 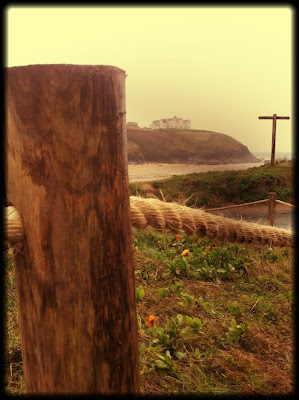 Posted by Lizard and Penrose NT at 12:50