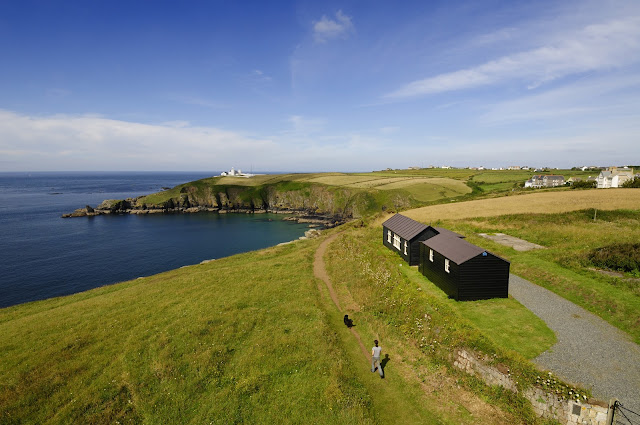 We must say a big thank you to all our dedicated volunteers at the Lizard Wireless Station. As a result of their fantastic efforts 2012 was our busiest ever season, with 3000 visitors popping by to learn more about the fascinating history of these unassuming black huts. The wireless museum, perched high on the cliffs over looking Housel Bay and the Lizard Lighthouse, opened to the public in 2001, in time to celebrate the centenary of the station, which was established by Marconi as an experimental wireless telegraphy site. In January 1901 the station received a message from the Isle of Wight, proving beyond all doubt that the curvature of the earth was no limit to the new technology which was championed by the ambitious young Gugleilmo Marconi. Just 11 months later, nearby Poldhu communicated with Canada, and the world had suddenly shrunk!

The radio station became a holiday chalet after WW2, and the National Trust bought it in a dilapidated state in the mid 1990s, and restored it to its original appearance from period photos. From its beginnings in 2001, the museum has been entirely dependent upon a dedicated band of volunteer stewards, who give their afternoons to opening up the station and sharing its history with visitors. 2012 has been a bumper year, thanks to them. Amongst their ranks are old hands who have been with us since the start, and 5 new recruits who have increased our numbers, allowing us to open up to 6 days per week in summer.

As well as being a busy year for visitors, the station has continued to attract media interest. Radio 6 breakfast DJ Sean Keaveny came to stay in the adjoining holiday cottage 'Wireless Cottage' in the Spring, writing a piece for the Guardian about his adventures in radio history. Listen out for a feature with our volunteer John on Radio 3 this month, about sound, wireless and space travel!

If you've not had a look in, then do stop by to see what's so special about these little huts. We're only open Sundays 1-3pm in winter, weather permitting, but we'll increase our opening from Easter. Wireless Cottage can be rented year round through www.nationaltrustcottages.co.uk

Here's to another bumper summer season!

Rachel
Posted by Lizard and Penrose NT at 21:45