Bee Part of It! update 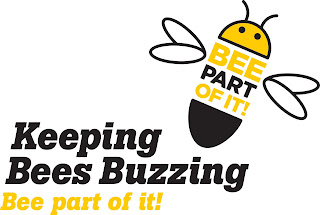 Since May this year, I have been involved in the National Trust's Bee Part of It! Project, in partnership with the BBC. The purpose of the this project was to highlight the plight of the honey bee and encourage the public to do more to help in its survival. The honey bee has struggled to survive in recent years due to a combination of disease, warm damp winters and changes in agricultural practices.
A hive with a small nucleus of bees was moved to Kynance Coves in mid May where the bees could take advantage of the wonderful variety of flowers growing at this special place. The Lizard is renowned for it’s rich and unusual flora, with some species growing nowhere else in the British Isles. Unique flora produces unique honey

All went well during the early days of the project. A warm and dry May and June, with some of the best shows of blossom and wild flowers seen for years gave an optimistic outlook for a bumper crop of honey as bee numbers swelled and the first stores of honey were stashed away.
By the end of June however, drought had set in and less nectar was available to the bees as the surrounding landscape was parched and brown. Then came July and rain returned to green up the fields and some of the later flowering plants began to flower around the heathland and cliffs. But when it’s cool and wet, like humans, bees tend to stay indoors and reduce their foraging trips.
Then disaster struck! On a routine visit to check the hive in late July, the queen appeared to have gone AWOL. There were no eggs laid in the brood chamber and no sign of the marked queen. Whilst queens live substantially longer than the workers and drones, up to 2 or 3 years, they do eventually stop laying and die. Regicide is also not uncommon in a hive if the workers decide the queen is past it. 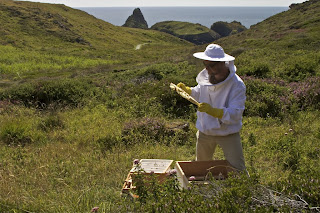 All was not lost however. Bees are clever and resourceful creatures and they had prepared for this eventuality by creating a new queen. The tell tale sign of an elongated queen cell on the edge of one of the frames gave an element of hope that the colony might survive.

A further visit a week later revealed that the workers had been successful as a new queen was evident and eggs were being laid. However, the loss of the queen had set the colony back considerably, possibly up to 2 months during potentially the most productive time of the year.
﻿photo credit Ben Giles
As another inevitably wet and windy August passed, honey production was slow despite a wonderful display of Cornish Heath and Bell heather around Kynance.

So far September has been kind to us, but it seems increasingly unlikely that we’ll be harvesting any honey this year. It’s important to leave enough honey in the hive for the bees to see through the winter, although they might be able to spare a single frame of comb honey to give to our friends at BBC Radio Cornwall who have followed the progress of the hive through the year.
Further updates to follow…..

Justin
Posted by Lizard and Penrose NT at 10:43