“I don’t like green beans!” said one young gardener as we started harvesting the fruits of our labour during last week’s gardening club. Five minutes later he was munching away on freshly picked sweet and crunchy beans, straight from the plant. These beans were a far cry from the limp and stringy variety found on supermarket shelves. 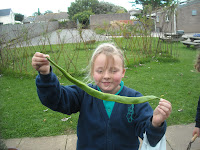 After a long week of meetings and general office work, I really look forward to our Friday afternoon Gardening Club at Mullion CP School. I’ve been running the club with help from Mullion in Bloom and Mullion Horticultural Society volunteers for the past few months. With a group of up to 15 young gardeners, we have been growing our own fruit and vegetables, planting trees around the school grounds and generally improving the school for the benefit of both children and wildlife.

Spring term is the really busy time, when all the beds are prepared, seeds sown and weeds pulled. By the end of term the first crops were being harvested (or in the case of strawberries, just eaten at break time). During the long summer holidays, one of our young gardeners (and her granny) kept an eye on the garden, watered the beds and harvested the vegetables (courgettes, beans, cabbages etc) which she sold outside her gate. She raised over £50!!!

Last Friday, we cleared one of the beds.
Red and purple potatoes were dug, runner beans picked (and eaten), leeks pulled and
a few overgrown courgettes and a giant pumpkin were discovered. We then dug over the bed and sowed some rocket which should mature before winter sets in. We were planning to turn the harvest into soup, but the enthusiasm of the kids took over and we spent too much time harvesting. The plan is to join forces with the school cookery club and make soup this week instead.
The club will continue through the winter, with the next project to sort out the wildlife garden and pond.  Through the sale of vegetables, together with a few kind donations has enabled the club to buy its own poly-tunnel, so next year we’ll be able to grow even more vegetables all year round.   Our ultimate goal is to transform the school dinners with more crunchy green beans and other wholesome fruit and veg. 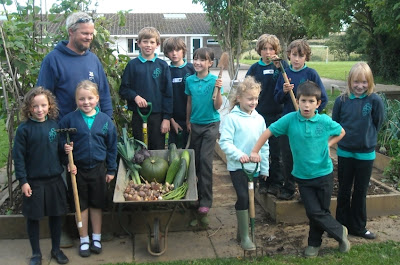 Happy gardening
Justin
Posted by Lizard and Penrose NT at 22:07