The MCS Beachwatch survey and beach clean up is a national event that has taken place every September since 1993, with help from MCS members, supporters and the general public.  The National Trust on the Lizard has been involved in the event since the very beginning.

On Saturday, members of the Gunwalloe Surf Life Saving Club helped me clean and survey the beach at Gunwalloe Church Cove.  Rather than just clean up the rubbish, each item picked up is recorded.  The data is then used by the MCS as part of their litter campaigns and is useful for lobbying governments and other decision makers about the problems of beach and marine litter.  Without knowing where marine litter originates, it is difficult to target the major polluters and reduce pollution at source.

Arriving at Gunwalloe on Saturday lunchtime, it was easy to believe the beach had already been cleaned, as there was very little visible rubbish.  I know that the Surf Life Saving Club, the RNLI, NT volunteers and other locals regularly remove litter from the beach, so I thought we were in for an easy task.

How very wrong I was!!  A closer inspection along the tideline showed all was not so clean and tidy after all.

After giving a short talk to the young members of the club about the dangers of beach rubbish to wildlife, (did you know that short sighted turtles regularly mistake floating plastic bags as their favourite food of jelly fish and their stomachs become so full of plastic that they starve to death, and that 90% of fulmars found dead around the North Sea have plastic in their stomachs?), we set to work clearing the beach of rubbish and recording our findings. 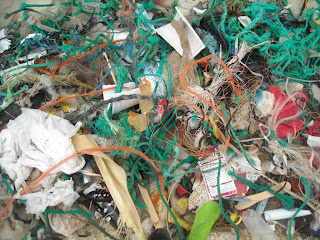 an example of the typical type of rubbish found on the beach
An extraordinary quantity of litter found on a small cornish beach, which on first impressions looked immaculate.  The worrying thing is the amount which originates from the sea, with the vast majority of rubbish originating from the fishing industry.  (isn't fishing the main industry which relies on a healthy marine environment?).  I would love to know why there are so many short cut pieces of green fishing net, only 2-10 cm long, found on all our beaches.  These look just like a sand eel to many fish and sea birds and are regularly digested.  Of course, this litter could have come from far away.  Plastic takes generations to break down and can travel enormous distances across the sea 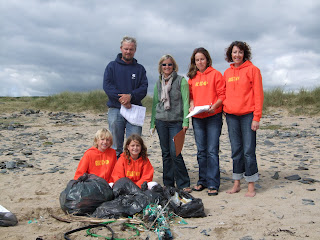 a few of the GSLC members who helped me with the survey
Anyway, a BIG thankyou to the Gunwalloe Surf Life Saving Club, especially the younger members, who so enthusiastically helped with the survey.  The beach really is immaculate now thanks to them.  (until the next westerley gale dumps a load more rubbish!)

Justin
Posted by Lizard and Penrose NT at 12:14