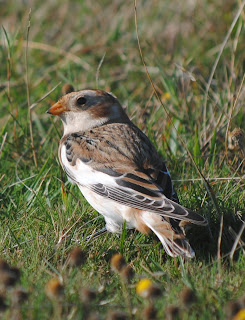 This Snow Bunting was found rather off course on the cliffs at Predannack last week. A winter visitor to Scotland and Eastern Britain, the Snow Bunting mainly resides in Greenland and Scandinavia with a small number breeding in Scotland, making it an Amber listed species in the UK.
Feeling Rather tired and hungry, this fellow decided the cliffs at Predannack would be a good place stop allowing Phillipa Sheldrake, visitor to the area, to take this rather fantastic photo.
We love to hear about wildlife sightings in the area and photos are also helpful for the record, so please do send them in.
Best of luck to the Snow Bunting finding his way home!
Elle
Posted by Lizard and Penrose NT at 13:57